Kitesurfing is quite a modern sport. Its history actually begins in the 1980s and 1990s. The popularity of kitesurfing, often also referred to as kiteboarding, was exploded after 2001 (this year I became interested in this sport) to get to its best period in 2010-2014. This time also saw the greatest inventions in terms of kitesurfing gear.

Kitesurfing has many similarities to kiteboarding which is a water-based sport but there are a few things that help us differentiate between the two. While kiteboarding follows a riding style often referred to as wake-style or freestyle, kitesurfing largely refers to ‘riding through the waves’. The performance kites and the boards used for each of these sports are different. In many countries, this names has faded and is used interchangeably. The name kiteboarding is more popular in the USA and kitesurfing in Europe.

A kitesurfer mostly uses a board that is devoid of bindings or foot-straps. Along with it, he uses the strength of a large-sized kite to move through the water. Over the years, the number of people who registered themselves as kitesurfers help one gauge the popularity of this sport. The number in the year 2006 was between 150,000 to 210,000. In the same year, around 114,465 inflatable kites were sold across the world. However, today, there are over 1.5 million registered kitesurfers and around 150,000 kites are being sold per year.

Beginning of using kites as a means of transportation

While several dynasties and individuals deserve credit for the evolution of water surfing as a sport, the Chinese were the first to make kites that were used for propulsion way back in the 13th century. In the 1800s, George Pocock, a builder and designer who specialized in making racing shells, used big kites to move wooden carts on land and large ships and boats on the water. He devised a four-line control system that is prevalent even today.

With the help of this system, both boats and carts were able to move around and sail upwind. It was then possible for these kites to be flown for a longer period. His goal was to showcase the fact that kite power had the potential to be an alternative to horsepower.

Using kite power instead of horsepower would have saved people from paying the much-despised ‘horse tax’ that the government had imposed during that period. In the year 1903, Samuel Cody, a pioneer in the field of aviation, invented what he referred to as ‘man-lifting kites’ and achieved success in traveling across the English channel with the help of a moderately-sized canvas boat that was powered by a strong kite.

The 70s and further evolution

Towards the end of the 1970s, one witnessed the development of Spectra and Kevlar flying lines along with the evolution of a bunch of kites that were easier to control and promised a higher level of efficiency. All these factors led to improvement in kite traction. In the year 1978, ‘FlexiFoil’, a Tornado catamaran developed by Ian Day and powered by a kite, touched a speed of 40 km/h. While discussing the evolution of kitesurfing, one can’t help but mention the name of a German gentleman named Dieter Strasilla.

From the late 70s till the early 80s, he worked diligently towards developing the various techniques of parachute-skiing and went on to devise a kiteskiing system that involved a ball-socket swivel and self-made paragliders. Along with his acquaintance Andrea Kuhn from Switzerland, Strasilla paired up this invention with surfboards, grasskies and buggies. In another invention patented in the year 1979, Strasilla has mentioned how an inflatable kite design can be used for kitesurfing.

How the sport further evolved in the 80s and the 90s

Dominique Legaignoux and Bruno Legaignoux, two brothers who belonged to the Atlantic coast of France, made several kites for kitesurfing in the 70s and 80s. In November 1984, the brothers also patented a unique kite design that is being used by big organizations to manufacture their products till date.

The development of practical kite buggying in the year 1990 by Peter Lynn further contributed to the cause of kitesurfing. He put together a buggy with three wheels attached to it. This particular buggy served as a forerunner to the advanced parafoil kite. While kite buggying was being developed, USA based Roeselers and Leaignoux from France made further innovations in the new-age kitesurfing.

A Boeing aerodynamicist named Bill Roeseler and Corey Roeseler, his son, developed the ‘KiteSki’ system that comprised of water skis that derived power from a delta style kite regulated with the help of a bar-mounted winch or brake. In the year 1994, this KiteSki was put up for sale in the commercial market. Armed with a robust water launch capability, this kite possessed the capability to move upwind.

In the year 1995, Corey Roeseler met Peter Lynn at Lake Clearwater in New Zealand and showcased the kind of balance and speed his ski offered. Towards the end of the 1990s, the ski developed by Corey had taken the shape of a single board that closely resembled a surfboard.

In the mid-90s, several people made significant efforts in the direction of popularizing kitesurfing as a water sport. In the year 1996, Manu Bertin and Laird Hamilton devoted much of their time to demonstrating the techniques of kitesurfing to tourists on the Hawaiian coast of Maui.

In the year 1997, the Legaignoux brothers came up with the design of the ‘Wipika’ kite that comprised of a structure featuring inflatable tubes and a bridle system. Bruno Legaignoux, one of the two brothers, carried out several initiatives to sharpen the design of the bow kite. The same design has been provided to several kite manufacturers on a licensing basis.

In the year 1997, Laurent Ness and Raphael Salles joined forces to developed specialist kiteboards. Kitesurfing achieved the status of a mainstream competitive sport in the year 1998 and by then, several kitesurfing institutes too had opened up. One of the first major kitesurfing competitions was organized in September 1998 in Maui. In this competition, Flash Austin was declared the winner.

By the time the year 1999 approached, single-direction boards based on the designs of surfing and windsurfing had become extremely common. Bi-directional boards that were based on wakeboard style became tremendously popular between 2001-02. The Luderitz Speed Challenge, organized on 18 September 2008 in Namibia, is an important event in the history of modern-day surfing.

During this event, kitesurfing was adjudged the fastest method of moving across or sailing on the water. The World Sailing Speed Record Council recognized the run attempted by USA’s Robert Douglas. Robert managed to cover 49.84 knots at 92.30km/h. Just a few days later, France’s Sebastien Cattelan became the first individual to cross 50 knots.

A great video showing the history of kitesurfing is below. You can see how archaic and dangerous everything was at the beginning.

Kitefoil, also referred to as foilboarding, is a type of water sport in which the rider or the participant rides a board that is one metre above the surface of the water. Enrico Forlanini, an inventor based in Italy, introduced the world to the first ever waterski hydrofoil in the year 1960. 12 years later, Bud Holst and Mike Murphy put together the first kneeboard for the purpose of water skiing in the year 1972. As technological innovations came into being, the sport kept evolving further.

Kitefoilboarding has experienced a real boom in recent years, mainly due to the fact that it will soon be an Olympic sport. Many kitesurfing veterans have switched to foil boards to take part in the competition.

Snowkiting is an outdoor sporting activity in which the participants use the power of the kite to glide through ice or snow. Due to the nature of this sport, it is practiced only during the winter season. Snowkiting, also referred to as kite skiing, has a lot in common with kitesurfing. However, there are a few important elements that differentiate them. In kitesurfing, for instance, a surfboard is used but in snowkiting, the participants use a pair of skis.

Dieter Strasilla, a chemist and aviation pioneer from Germany, is credited for discovering the sport of snowkiting. Strasilla was helped by many friends and sports enthusiasts during his journey of polishing this sport further. Throughout the 1960s, Dieter Strasilla invested a lot of his time and effort towards developing a skiing sport that would be propelled by wind energy.

After a lot of failed attempts, he managed to develop a model of the snowkite in the year 1972. Throughout the 1980s, many engineers, inventors and sports enthusiasts played a significant role in the evolution of this sport. It didn’t take much time for snowkiting to become a popular sport in the United States. As years passed by, its popularity spread throughout the world. 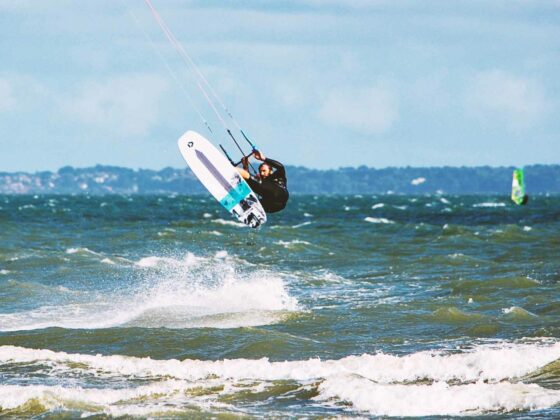 What is the Difference Between Kiteboarding and Kitesurfing?